It was with great interest that I read in the news recently tale of Jennie Platt from Prestwich, who has been so incensed at the installation of anti-homeless spikes in Manchester, that she’s covered them up with cushions. According to Ms Platt, “The building owners are treating human beings like pigeons.”

This line intrigued me, and for a number of reasons. Firstly, there is the obvious assumption on the part of Ms Platt that we are not like pigeons and should not be treated as such. Yet in reality we all know and accept that we actually are an awful lot like pigeons and share more in common with them than we like to admit. In a way this incident reminds us of the strange Orwellian ‘double-think’ that we all subscribe to on a daily basis. That is, the way that we are at once both human and animal, and define our humanity in relation to, and through the exclusion of, the ‘animal’ other. 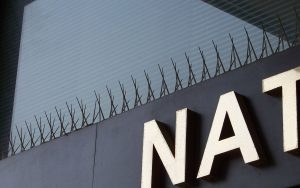 Yet there is an even more striking lesson to be taken from the story of Ms Platt and the anti-homeless spikes. And that is how the animal and the human-animal distinction are used as a means of sovereign control.

And yet with each and every interaction described above, there is an important power relationship going on. A relationship that is fundamentally built on the concept of the animal, the human, and what Giorgio Agamben has referred to as ‘bare life’.

This is because whether you helped the homeless person or not, the situation remains that they are still homeless, and still left sitting outside in the cold. Much as I am sure any homeless person would appreciate Ms Platt’s efforts, we each know, reading this article, that things will not change overnight. The homeless will still be sitting on our streets tomorrow, and the day after, and they will still be shivering cold and alone.

In a way, the homeless in our society are treated as animals – or even worse than animals – because most domesticated animals are used to living indoors with food and shelter aplenty. 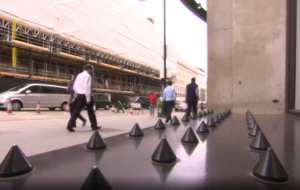 Of course I’m not saying homeless people are literally ‘animals’, but rather we have socially created them, and they philosophically function as exceptions that prove the rule. We create these ‘animals’, or rather ‘non-human, non-animals’ and each and every time we see one of them or give them some change, we are encouraged to remember our own relative comfort and ‘humanity’.

The irony of course is that humanity here, seems to be in very short supply. Naturally, this depends on how you define humanity, but as we have already seen, ‘humanity’ is just as much a construct as gender, race, or any major discourse permeating our society.

What this news story does is remind that for the most part, we are quite willing to subscribe to and support the animalisation of the marginalised in our society. We are all too happy to turn a blind eye when it suits us. It just happens that in this particular case, the use of ‘anti-homeless’ spikes pushed the concept into the realm of the realised present for one particular citizen.

While I certainly agree that we need to do more for the homeless in our society, philosophically speaking, we also need to re-visit our concepts of the animal and the human, and how these artificial constructs are used for the domination and subjugation of others, both at home, and abroad.