I was somewhat surprised this week to see a post on social media announcing that a dog has received a staff ID card at Canterbury Christ Church University (CCCU).

While I have no problem with dogs on campus, or indeed the work of Justice Support Dogs International (JSDI), I do find the fact that a dog should receive a human staff ID card somewhat unsettling. This is because it serves to further enshrine a biopolitical discourse surrounding the human and the animal, and goes to show the power of major institutions to dictate the terms on which we define what constitutes the human and the animal.

While some readers may find the news about Oliver fairly innocuous, or even quite fun, the problem is not the card itself, but what the card represents, and the border for inclusion that places a dog above those not included within the formalised university group. In this case, Oliver the dog has more rights than many human employees at the same institution, even though he is incapable of exercising the same human responsibilities that form a part of the membership contract.

In this way, Oliver the Justice Dog reveals something of the operation of power within the biopolitical state through the very act of his exclusory-inclusion within the category of the human.

As I have alluded to in a previous blog about the animalisation of the homeless, the ID card scenario in this story reveals the power of state apparatuses to dictate the terms of inclusion and exclusion with regards to the category of the ‘human’, such that even a dog can be granted more rights than a biological human being.

In this case, the operation of power is not revealed by an exclusion, as in the case of Giorgio Agamben’s homo sacer, but rather by an inclusion that serves to reiterate the terms for exclusion.[1] Thus, Oliver the Justice Dog is what we might describe as a reverse or ‘inverted’ homo sacer –  an animal made human to enshrine the operation of sovereign power and the law.

In the case of Oliver the Justice Dog, it is interesting how his ID card serves to disrupt the criteria for inclusion, as he is certainly not biologically human, and is therefore incapable of meeting the requirements placed upon him as member of the CCCU group.[2] Indeed, Oliver wouldn’t be expected to meet any human obligations at all, and this precisely the point: he is an exception that proves the rule – a limit case that reinforces and repeats the ‘logic’ of the inclusion-exclusion dynamic.

However, though it might be disruptive, Oliver’s ID card also serves to enshrine the very rule it disrupts. By suspending the rule that says a dog cannot be a member of staff (you might also say, by suspending our disbelief), so the mechanism of power is exposed, and we see something of the sovereign decision in the moment at which Oliver is simultaneously cast as both human and animal, and placed above the likes of the homeless who are cast out and exiled on account of their animality on a daily basis. 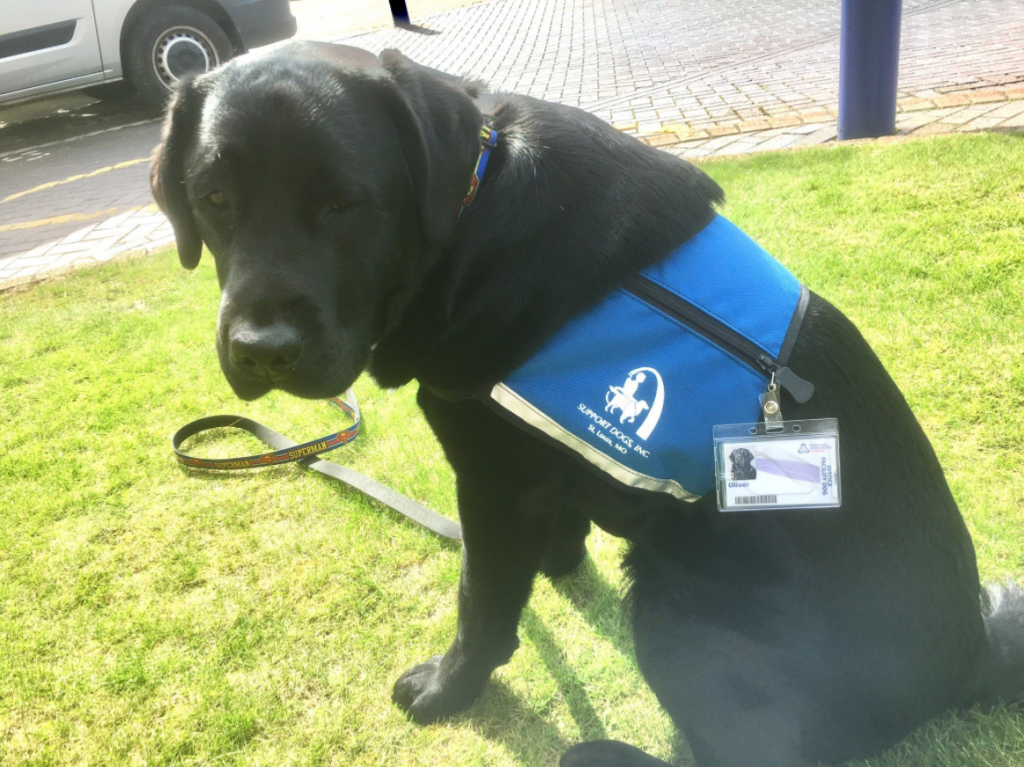 The dark side of the human

Though it may seem just a ‘bit of fun’ to give Oliver an ID card and include him in the same category as human members of staff, the act itself is symbolic of a much wider, more pervasive problem in our society. On a daily basis, we will wilfully exclude the homeless and cast them as animal or sub-human, and yet at the same time will raise up certain animals on a platform above all others; service dogs are a good example.

Though I don’t doubt Oliver is a worthy addition to CCCU and doubtless performs a valuable role, the act of his pseudo-humanisation only serves to demonstrate the fuzzy, blurred boundary between the animal and the human, and the ease with which the sovereign can dictate the precise terms on which individuals are included in, and excluded from, the community group.

If there is one lesson to be taken from the case of Oliver the Justice Dog, it is this: The human is an artificial category. We are all only ‘human’ because someone says so. Lose your money and your home and you will soon see how quickly that category can be lost.

[2] This in contrast with the original homo sacer who, as a natural-born human, is always already a biological animal.