Every morning here at Lancaster I like to take a walk down to the lake to see the ducks.[1] I find it’s a great way to clear my head before I start my day of work.

But one morning last week my walk was disturbed by the appearance of a whole raft of new signs bolted on to the fences alongside the hockey pitches: 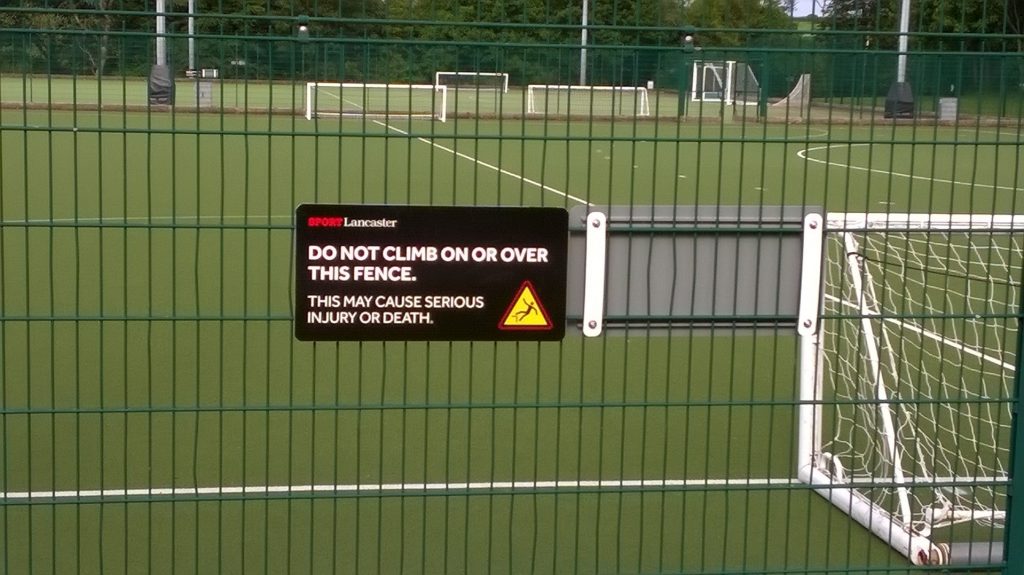 Sign text: ‘Do not climb on or over this fence. This may cause serious injury or death.’

I can’t quite put into words my reaction when I read this warning. Something about it just seemed wrong – excessive even. Of course climbing a fence does carry with it some degree of risk, but death…

A world of risk

It’s fair to say that most people probably wouldn’t give these signs a second glance. Signs such as these are so common nowadays that we just accept them as a part of everyday life.

But as a biopolitics scholar, I find these signs fascinating. Four questions in particular spring to mind:

A question of purpose

On first glance these signs may appear designed to deter would-be trespassers from entering the pitches. But in reality the pitches are mostly left unlocked and the principle users (students in their early 20s) don’t need to trespass in order to use the facilities.

In reality, the only people who might be tempted to climb the fences are the children who flock to our sports fields during their school holidays. But then, when did a 13-year-old ever take notice of a warning sign?

Clearly the team at Sport Lancaster are trying to cover themselves in case anything should happen to anyone climbing fences on University grounds. But once you’re in, surely you will also need to climb out again? (Assuming the gates are locked…) Why even bother putting the same sign on the inside at all?

From a biopolitical perspective, these warning signs aren’t so much to deter trespassers or children with nothing better to do – rather, they function as a symbolic reference point that serves to repeat the imperative to survive and to obey.

Life, we are told, is a constant struggle – we live in constant fear for our lives – and Sport Lancaster’s warning signs are just another example of how our lives are framed within the context of precarity. Only the State offers protection from the many risks associated with living. By following the dictates of the State (whether directly through laws, or indirectly through segmentary power structures) we minimise the risk of death and in turn repeat the imperative to survive and to obey.

On the reproduction of power

Looking back at the warning signs, you may be forgiven for thinking that the people at Sport Lancaster are making an intentional biopolitical comment – that they are acting directly on behalf of the sovereign State. However the reality is that the people at Sport Lancaster probably don’t realise the implications of their actions – and this is an observation that cuts right to the very heart of how power functions within society.

Here, the sovereign doesn’t direct every single action (or inaction) among citizen subjects. Rather power flows through segmentary power structures such that the sovereign decision can never be isolated to a single point. In this example, the imperative is to keep people safe. The law says that Lancaster might be liable if someone should come to harm by climbing the fences, and as such action needs to be taken. In order to minimise economic and legal risk to the University, Sport Lancaster has taken steps to protect both itself (as a department), and the wider institution by the installation of a set of warning signs across the sports fields.

We should note that no single sovereign decision said ‘keep people off the fences because they might die’. Rather, several segmentary power structures functioned together such that legal, economic, political and health-based factors conspired to bring about a decision that never once referred (or refers) back to the original sovereign act. Here, the sovereign functions not through action, but rather inaction, and the repetition and reproduction of power structures through the milieu of everyday life. The sovereign’s power is such that it doesn’t need to make a decision, but rather the decision is made by others who would claim to act on its behalf. The sovereign is therefore at once presented, and re-presented while simultaneously slipping away from view.

Signs are interesting things. They say a lot about us, and the world in which we live. While the warning signs erected by Sport Lancaster are certainly excessive, they are in many respects a ‘sign of our times’. More than ever now, our lives are framed within the narrative of a precarious existence that can come to an end at any time.

Each and every one of us is constituted within a discursive framework of life and death – what it means to be alive, and what it means to die, and the implied ‘difference’ between the human and the animal.

Of course things aren’t going to change any time soon. Indeed, they may never change. However if there’s one thing I hope you take away from this blog it’s this: question everything; read between the lines; ask yourself why things are the way they are. Any maybe, just maybe, we might all of us free ourselves of some of the discursive chains that bind us.