If I were to ask you to think of an image relating to the Vietnam War, I am sure most people will conjure the famous image of the young girl running naked towards the camera; or perhaps the Saigon execution, or even the photo of the burning monk. But there’s another photo from Vietnam that deserves our attention – one that I can’t believe I hadn’t seen until just recently.

The image below was taken by English photojournalist Larry Burrows, and was included in a feature in Life magazine in April 1965. In the feature, ‘One Ride with Yankee Papa 13’, Burrows was invited to join a US helicopter crew in Da Nang, Vietnam.[1] There he would ride alongside Crew Chief Lance Cpl. James C. Farley aboard helicopter Yankee Papa 13 (YP13) on a mission to airlift a battalion of Vietnamese troops to a location about 20 miles from the US airbase.

What started as a routine mission soon turned to disaster as the vulnerable helicopters came under fire from entrenched enemy forces. In a harrowing photographic report, Burrows depicts each stage of the mission as many of the helicopters are shot down and the crew of YP13 attempt to rescue some of the downed craft.

The final picture, featured above, is the closing piece of a dramatic report that cuts to the heart of the tensions at the heart of the US military. Far more than the pain and suffering of troopers fighting on the ground, the picture reveals something of the psychological impact of the war, and the crisis of masculinity that aligned emotion with weakness. Such was the power of this hyper-masculine military discourse that even many years later, James C. Farley admitted he still felt embarrassed by it, suggesting that ‘I guess because, well, it’s not what a Marine is supposed to do. I guess it still bothers me, you want to know.’[2]

In many ways, the photo of Farley crying is as much an emblem of Vietnam as the executions, the bombings and the many, many deaths. While some images of Vietnam remained etched in our collective memory of Vietnam, I suggest we should also include this one as well. On the one hand it tells a story of emotion, tragedy and loss; yet on the other it also tells a much deeper story about masculinity, trauma and the psychological impact of war. It also cuts to the heart of the tension at the heart of the US military endeavour in Vietnam, and the irrevocable impact on not just the bodies of soldier and civilians, but on their hearts and minds as well.

If you have a spare few minutes today, I do highly recommend taking some time to have a look through the Life photo report (available for free) to see for yourself what it was like to be aboard a helicopter over the jungles of Vietnam in 1965. 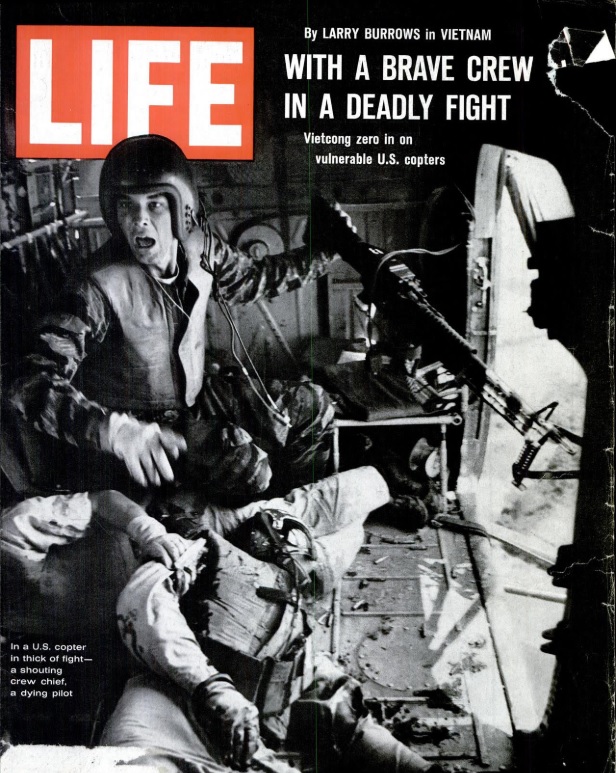