It’s been a few months since I last posted a PhD update. As Christmas is nearly upon us I thought I’d share with you some news on what I’ve been working on and what I’ve been up to.

I’m currently mid-way through my fifth chapter, with an aim to have a first draft done in time for Easter. I’ve got absolutely loads to do to update my previous chapters so I don’t think that ‘first draft’ will be anything like what I want my final project to look like. I’m currently writing on Ender’s Game (among other books) and still need to add in more material on Man Plus and The Penultimate Truth to several other of my chapters.

As well as working on my thesis I am putting a lot of working into getting published this year and next. I’ve currently got some book chapters lined up for next year and I’m also working on a joint paper with a colleague in law. I also have some material on Slaughterhouse-Five I’m looking to publish, as well as my current draft chapter on Ender’s Game.

Last but by no means least, I have some creative work that I’ve been sitting on for the last few years that I’m looking to do something with. I’ve currently loaned it to a few friends and am seeking feedback on whether or not it is quite ‘publishable’ and worth doing something with. If it is I may consider trying my hand at self-publishing some time next year.

Running a blog is no easy feat and I’m currently writing and/or helping out with several blogs including this one, Let’s Talk Academia, TTAC21, Hey Millennials and the new NWCDTP blog, which I’m hoping to write for shortly.

I’m currently focussing my efforts on academic and/or student-life related issues as well as digital marketing for academics and various academic bits and pieces for the TTAC21 reading group. It feels like quite a lot but writing comes fairly easy to me, and I  like to think I know my stuff when it comes to marketing, especially digital media for academics, so I find it quite a good outlet for my creative side away from my PhD

This year has been my first full calendar year as a PhD student and I’ve given several papers at academic conferences. I’ve also helped organise the AHRC postgraduate conference for the NWCDTP (that’s my funding consortium), which I also gave a paper at and even ran a marketing workshop. In March I will be presenting a paper at Oxford, and I’m also looking at presenting at several science fiction conferences at Lancaster and Liverpool in 2018. 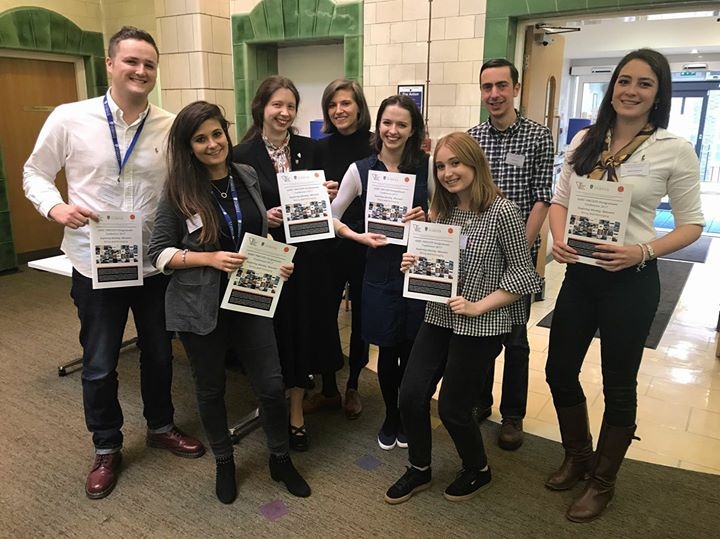 The organising committee from the AHRC’s NWCDTP Postgraduate Conference, Liverpool, 2017.

I know some of my colleagues spend an awful lot of time (and money) attending conferences, but I’m trying to be pragmatic about which conferences I go and give a paper at. After all, it’s publications, not conferences, that get you a job in academia, so this is where I’m currently focussing my efforts.

Finally I should mention my work outside of my PhD. Currently I have three jobs (ish) which can fluctuate depending on the time of year. I currently work for Student Communications at Lancaster, IT Communications at CCCU, and I am also Assistant Dean for the Graduate College, also here at Lancaster. I also take on ad hoc freelance work such as my recent project to migrate and refresh the Graduate College’s website, and am currently engaged to do similar work for Pendle College starting in January 2018.

Some people may comment that this is a lot of work, but to be honest I find it often helps me with my academic work. When I first came to Lancaster I found I missed the day-to-day interaction of a full-time job, and I also missed a part of the routine. Though it may seem strange, having several jobs actually helps me think better about my PhD and helps me focus more when I do finally sit down and do it (the money helps too!) It’s certainly not for everyone, but I figure I’ve got the skills and the capacity to do it and it’s not affecting my studies so why not?!