I like creating things. In 2010 I self-published a book trilogy I wrote in my late teens and early twenties (2003–2007). The process was a complicated one, and beset by several major problems. In the end, I lost a lot of money, and if I’m honest, the final product didn’t look quite as good as I’d hoped.

However, a lot of time has passed since 2010, and self-publishing services have come on a long way.

For the last year or so now I’ve been toying with the idea of trying self-publishing again, to see if I can produce something I’m happier with and can be more proud of. Back in 2009 I wrote a follow-up young adult (YA) novel, that’s been sitting gathering dust for many years. I’ve re-read it several times now, and it’s certainly a lot better than my original trilogy – it’s more ‘self-contained’ and at just under 50,000 words it’s also a lot more accessible.[1]

So, dear readers, I’ve decided I’m going to embark on the self-publishing journey once more. I’ve been working especially hard recently to save up money for life after my PhD, and I’ve just about got enough to invest in a new project. Yes, it’s a risk, but ultimately I’m not in it to make money – I’d like to have something to show for all my efforts over the years and something that (if I’m lucky) people might actually read.[2] 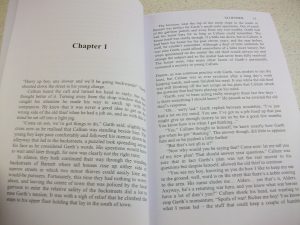 The lovingly (and painstakingly) formatted interior to ‘The Powers That Be’

Back in 2010, I published a series of blogs following my self-publishing journey. Most of those blogs have long since been deleted, however many of the lessons learnt remain the same:

So now I’ve decided I’m going to self-publish, what next? Well given that I’ve now officially ‘announced’ it (and there’s no going back!), the next step is to go back to the manuscript to double check a few things. I’ve already done a lot of revising and fine-tuning over the past year or so, but there are a few consistency issues I’d like to adjust slightly just so there’s absolutely no prior knowledge needed for the book to work on its own.

After that, my next step is to research and contact various self-publishing agencies to see what’s on offer. I’ve already done a bit of research, and have an idea over the company I want to use, but I don’t want to be caught out in the same way I was back in 2010. Once I’ve found the company I want to work with the next stage after that will be working on them with a cover etc. That’s still some way off yet, but I will post regular updates as and when they occur.

[1] Ok, so 50k is probably more in long-novella territory, but the benefit of self-publishing is you have total control over what you put to print!

One thought on “A return to self-publishing”